Even Brahma, Vishnu, Mahesh want you to innovate. Check it how… 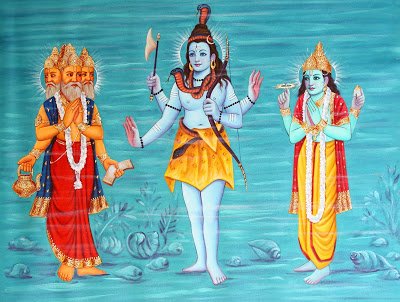 The idea in brief: Leaders have to manage the past, present and future simultaneously. The three boxes represent these three orientations.

BOX 1: Manage the present core businesses at peak efficiency and profitability. Like Vishnu, the firm must preserve its existing core.

BOX 2: Breakaway from obsolete practices of the past. Some of these may have been the source of past success. Like Shiva it must destroy unproductive vestiges of the past.

BOX 3: Innovate nonlinear futures for the business by redefining your set of customers and reinventing the value chain. Like Brahma the leader needs to create a potent new future that will replenish what time and circumstance have destroyed.

Looking for discontinuities could be the starting point of the journey towards creating a future that may have very little to do with the past business or its success factors. The discontinuities could be because of small or emerging customer segments today that are using or even customizing your products or services in unconventional ways. It may be worth asking what the priorities for these new customers could be that the company may not be prepared to deliver today. What technological discontinuities can be leveraged in this journey that may give us a competitive advantage. What kind of talent would deliver the future?

GE’s evolution is a great example of the three box solution in practice. Jeff Immelt, CEO has driven the cultural transformation by building nimbleness into GE’s corporate culture while keeping the engineering core of the company untouched. This has enabled GE to develop a new gas turbine in a year and a half, rather than the usual five. That is a box 1 move.

By selling off $200 billion of its Appliances Division to Haier and subsequently taking the decision to sell off GE Capital assets, the company is making a clear Box 2 move of breaking away from something that was once a flagship business and contributed at one stage almost 40% of its revenue. Without doubt this is the toughest part of the 3 box act.

Being able to visualize GE as a major player in the Industrial Internet is a great example of Box 3 strategy. Jeff Immelt started visualizing GE as a data company and started hiring software engineers. This has helped them to develop an operating system Predix which analyses the vast amount of data generated by its turbines and aircraft engines. It is expected that 90 percent of GE’s profits will come from industrial operations by 2018. The bet seems to be paying off. In 2015, GE made $5 billion by selling software. They expect to be among the top ten software providers by 2020.